Fashion for the New Millennium

environmentalism for the hip

Women’s Renaissance Worldwide ~ or Taking Back the C Word

Women worldwide seem to be standing up for each other. Inspired by young women, the rest of the female population courageously and in the face of all odds is standing up to male aggression and domination. It’s a beautiful thing on the planet today and I so very much appreciate and admire the gentle men who stand with us. American gender battles pale in comparison to far more suppressed regimes and religions. Nonetheless, our battle are real.

But first we have to change the vernacular!

Homosexuals took back Gay, Fag, Queer. Now they wear the labels with pride.

Blacks took back the N word and in the enlightened voice of Ice Cube to Bill Maher, “We took it back. We own it and you can’t use it.” Yesss!

Thanks to Donald Trump’s vulgar, low resonating perspective on life and his infamous grab ’em by the pussy remark, women have reclaimed Pussy. In fact, we proudly don our Pussy Hats en masse.

When Chaucer (1343-1400) wrote The Canterbury Tales (published 1475), he used the term five times! I researched it. Granted, some of the cunts were spelled cuny and queynte, but few literary historians dispute that this is exactly what he was referring to. Apparently the word has only recently devolved into the derogatory. I read a portion of a poem written by an unknown author during the Renaissance, “I thrust my hands down her skirt and fondled her warm cunt.” Sorry folks, that does not sound so bad to me. We’re manipulated by contemporary norms, despite historic accuracy (see last month’s post PC or HC? Historically Correct). Thus, we take the insult and claim it as part of our whole self and now we own it. Cunt can no longer degrade and demeans us.

I say let’s take back Cunt! And while we’re at it, let’s rescue PMS from the insult bin. Maybe we’re not crabby and pissy because we’re about to have our period, but because our body is physically producing the most important function of our wombed species: procreating. Every woman is pumping out her best egg at PMS time, so perhaps we are focusing on staying away from fools and energy thieves. When we are at the peak of our fertilization selection process, we will not put up with annoying, mindless distractions!

Let’s take our renewed energy and get to the streets on Saturday, January 20 to reaffirm our commitment to our historic code of honor and dignity. Ladies, wear your pussy hats to embolden each other and to let the world know that we still strive for the perfect American blend of Compassion and Common Sense! 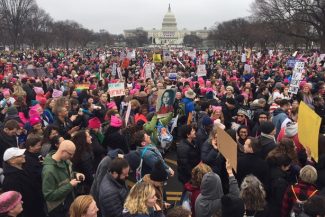 Every secondhand purchase diminishes several Environmental and
Human Rights issues that are associated with haute couture.
And, you can look like a million bucks for Goodwill prices!

Filed Under: Environmentalism for the hip
Tags: Cunt

This site uses Akismet to reduce spam. Learn how your comment data is processed.